When he refuses to wear a condom (10 common excuses) 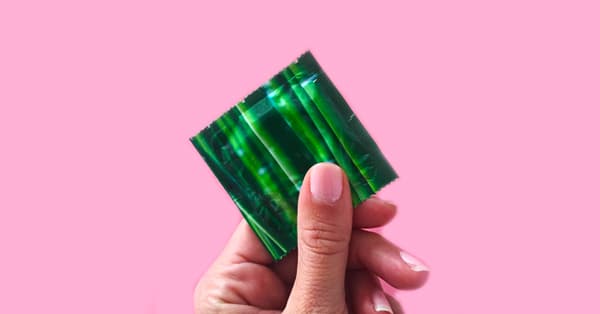 Edward (yes, let’s call him Edward) made like he was going to stick it in me. Sorry for my lack of poetics here, but it wasn’t very, well…artful.

“Wait a minute. Do you have a condom?” I asked, already offended, and rapidly losing my hard-on.

“I’m reeeeally good at pulling out,” he said.

“I don’t particularly want to take a chance with the whole pregnancy thing…and aren’t you at least a little concerned about catching something?”

“No,” he smiled, deftly ignoring the pregnancy half of my statement. “I’m not worried. I can tell you’re clean.”

“Oh? How can you tell?” I pressed, at this point appalled.

“I can just tell.” By the way he was smiling I could tell he thought this was a compliment.

I was already on my feet and putting my clothes back on.

Isn’t this in everyone’s interest? WTF?

The fact that any woman (or man) anywhere has to argue with any man about wearing a condom is batshit freaking crazy. Nobody should have to explain - or defend - their preference for safer sex. Most women I know have had men try and negotiate with them, or convince them, in one way or another, that barebacking is the way to go. To that I say: bitch, please.

Given the way these situations unfold, and how damn often they happen, an alien race staring down upon our hetero follies would do well to conclude that:

a) condom use is exclusively for women’s protection, and

b) that men don’t care about protecting women.

But yo, men are just as susceptible to STIs as women. 9.5 million adolescents (15 to 24) are diagnosed with an STI each year, according to the US Department of Health Services.

So...what's up with resistance or indifference to condoms?

The fact that men are more often asymptomatic than women when they have an STI?

All of the above?

Probably. And we women give in sometimes, too. I know I have. Maybe it’s the heat of the moment, or maybe we’re afraid of being seen as prudish…or bitchy.

It might seem like common sense: if you don't want a baby or an STI, you use protection. Right? Right.

But according to a recent study, there’s a seemingly extraneous factor that influences whether a guy wants to wear a condom or not: how into his partner he is.

A bunch of straight men were shown photos of women and asked to rate their attractiveness, how likely they thought it was they had STIs, and how willing they were to have unprotected sex with them. The more attractive they found the women, the more they wanted to have sex with them. But what didn’t add up was that attractiveness made them want to have condomless sex. Inspiring, right?

According to a 2013 study, 80% of men have tried to resist putting on condoms. This should shock and appall you. Condom use increased steadily from the 1990s on, but in more recent years, US condom use has been falling, especially among younger men.

Perhaps the most disturbing condom-associated news of all is the rise of “stealthing,” which is when men non-consensually remove their condom in the middle of sex without their partner knowing. There are even online communities where men encourage each other to “stealth” their partners.

A report in the Columbia Journal of Gender and Law argues that “stealthing” (what a disgusting term, am I right?) is sexual assault and should be treated as such.

Makes perfect sense to me.

The perpetrators believe it’s a man’s right to “spread one’s seed.” Not only does “stealthing” expose victims/survivors to to pregnancy and STIs; it also has the a similar emotional, physical and financial impact that more officially defined sex crimes do. Lead author Alexandra Brodsky concludes that since laws don’t cover “stealthing,” a new statute is necessary to address this all-too-common violation of our sexual and reproductive choices.

In January, a Swiss court convicted a man of rape after he took off his condom without telling his partner. The court concluded the woman would have said no to sex if the condom hadn’t been agreed on.

As far as consensual sex acts go, let’s take a closer look at some of the most common excuses men give for not wearing a condom, and the appropriate responses, in case you’ve ever been at a loss for words.

“Yep, but the pill doesn’t do anything to prevent STIs.”

And if you’re like me, and refuse to take the pill for health reasons, you can say:

“Condoms are my birth control, actually. And what about STIs?”

“Errrm, ok. You get tested after every partner? Paperwork, please. And why aren’t you asking me if I’ve been tested?”

“I hear there are all kinds of condoms out there. Here’s a good resource for finding the perfect fit and style!”

“What about the fiery lust flying between us? Nothing? And again, see the above resource.”

“But I’ll pay more, with crazy hormonal swings, nausea, and a generally fucked up cycle for up to 3 months after the fact. Thanks, but no thanks.”

“Same, but I’m also pro not having an abortion just because you refuse to wear a condom.”

“I agree. But it’s not worth it. Ask me again after I’ve known you a few months, we’ve both been tested, and we’re considering having a baby.”