Aromantic is the adjective form of aromanticism, a romantic orientation characterized by a lack of romantic attraction.

Aromanticism is said to exist on a spectrum. People on the aromantic spectrum (also referred to as “aro-spec” individuals) feel little to no romantic attraction to anyone or the desire to pursue romantic relationships. People of any gender or sexual orientation can be aromantic.

The opposite of aromantic is alloromantic: the tendency to develop romantic attraction, romantic feelings, and the desire for romantic relationships.

Since they can and do overlap, sexual and romantic orientation are often conflated. However, they are two distinctly different terms and concepts.

At this time, there has been little research carried out on aromanticism. Because many people find it difficult to draw a distinction between sexual and romantic attraction, studying the topic has proven difficult to date. The broader distinguishing factors between romantic and sexual orientation remain somewhat unclear.

A common misconception is that aromanticism means a lack of emotional intelligence or the lack of ability to form intimate relationships of any kind. Some aromantics may be repulsed by the idea of romance and its associated feelings, but others may simply be neutral or indifferent to them. Others still may experience feelings of romantic love, but only under exceptional circumstances.

The “A” in LGBTQIA+ stands collectively for Asexual, Aromantic, and Agender. Because of this shared A, the A spectrum (abbreviated to a-spec) is an umbrella term that can be used to refer to both the asexual and aromatic spectra at the same time.

As a romantic orientation, aromanticism does not comment on one’s sexual orientation or tendencies regardling sexual attraction or desire.

The Aromantic Spectrum is the umbrella term that includes all of the variations of romantic identities that fall under the category of aromanticism. While some aromantic people feel no romantic attraction under any circumstances, others may feel it on occasion, under very particular circumstances. Because these circumstances are exceptional and/or rare, they feel they identify more closely with the aromantic experience than the alloromantic one.

Other notable identities and microlabels under the umbrella of the aromantic spectrum include:

- Aegoromantic: An individual who is interested in romance as a concept or on a fantasy level, but has no interest in engaging in romantic activity or desire for romantic relationship.

- Aroflux: An individual whose tendency for romantic attraction shifts over time.

- Autoromantic: An individual who can feel a romantic attraction towards themself.

- Cupioromantic: An individual who does not feel romantic attraction though desires a romantic relationship all the same.

- Demiromantic: An individual who only experiences romantic feelings towards another person after they have developed a strong emotional connection with that person.

- Gray-romantic: An individual who occasionally, however rarely, experiences romantic feelings and only under certain conditions.

- Lithromantic: Also known as Akoiromantic, an individual who may experience romantic feelings toward another person as long as those feelings are not reciprocated. When romantic desire is returned, the attraction the lithromantic/akoiromantic person feels then dissipates or disappears.

- Quoiromantic: Also sometimes known as WTFromantic, an individual who cannot discern the difference between different forms of attraction and whether or not they are experiencing any attraction.

- Recipromantic: An individual who only experiences romantic feelings when they know that the other person feels the same way they do. 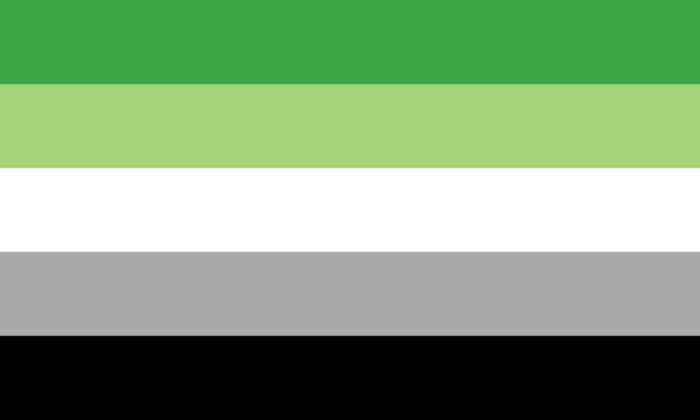 Several proposals for an aromantic pride flag have been made over the years. The most commonly used flag today, created by Cameron Whimsey in 2014, has horizontal stripes of equal width that run in a kind of gradient; starting at the top with dark green, moving down through light green, white, gray, and black.

The dark green represents aromanticism while light green incorporates the rest of the aromantic spectrum. Green was chosen as it was the complimentary (opposite) color on the color wheel to red: the color most typically associated with feelings of romantic love.The white stripe symbolizes platonic and aesthetic attractions, and the gray and black stripes acknowledge the sexuality spectrum in its entirety.

Other aromantic symbols include an arrow, which is a homophone to the abbreviated aro, a white ring on the middle finger of the left hand, a green heart, the playing card spade, and obscurely, an aardvark.