Demiromantic is the adjective form of demiromanticism, a romantic orientation on the aromantic spectrum which describes an individual who only experiences romantic feelings towards another person after they have developed a strong emotional connection with that person.

Demiromantic and the Aromantic Spectrum

Demisexuality is on the asexual spectrum, asexuality being a sexual orientation where people experience little to no sexual attraction to others or sexual desire in general. It is possible for someone to be both demiromantic and demisexual, but they are not synonymous nor do they always occur in the same individual.

Unless they are asexual as well, demiromantic individuals can and do feel sexual attraction and desire. Their sexual desires do not hinge on the precursor of a deep emotional connection. It is their romantic feelings that depend on a trusting bond being formed first. These emotional bonds can sometimes take years to develop.

Demiromanticism does not affect a given individual’s need or desire for physical intimacy. Many demiromantic people enjoy being physically close with others and engaging in physically intimate exchanges like hugging, affectionate touch, and sexual activities, while others do not. Their demiromanticism determines who they ultimately form romantic attractions and relationships with, not their level of physical affection needs.

Unless they are also demisexual, a romantic or emotional connection is not necessarily required to experience sexual desire or connection. Demiromantic people can develop sexual interest in others and enjoy partaking in sexual activity. 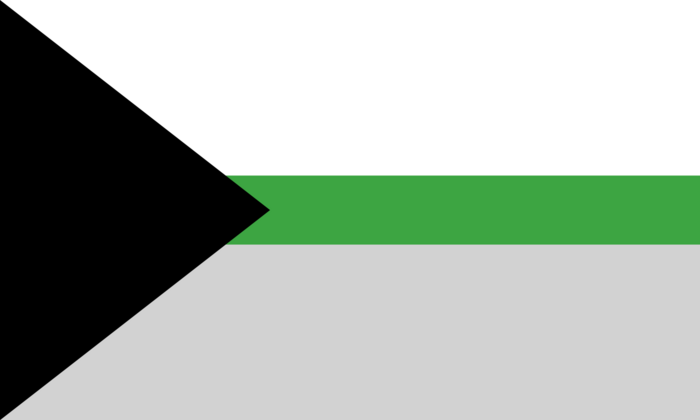 There are a few variations of the pride flag that represents the demiromanticism. The flag features a black triangle on the left paired with horizontal stripes in white, green, and gray. These colors are common to the aromatic flag.

Alternate versions of the demiromantic flag include a yellow stripe, and another that removes the triangle to have stacked horizontal stripes which run the length of the flag and present as a kind of gradient with dark green at the top, then light green, black in the middle, white, and finally gray at the bottom.