The Bloody Truth About Period Sex: Let's Talk About It

A few months ago, I was shopping for tampons at my local pharmacy; it was a Tuesday night in late September, and I was hunched over a shopping cart trying to hold myself up because the weight of my bloated stomach and the severity of my cramps was simply too much to bear standing upright. Annie Lennox was comforting me with her tender, soulful voice overhead as I weaved in and out of each aisle, cruising dementedly for the super-super-plus cotton blood soakers I so desperately needed. I thought the entire scene was hilarious, of course, because not even two months earlier I was dancing my face off until 6 a.m. at a club in Ibiza—my tan, svelte body writhing away, and then here I was, a weak, tired, pale, swollen version of my former self, in a situation that could not be more starkly opposite from that hedonistic memory.

And me being me, I picked up my phone to text this guy who I'd met a few weeks earlier and—if I'm to be honest with you, thought was hot and wanted to hook up with. Except for whatever bizarro reason was going through my head that evening (I blame the rapid increase in loss of blood), I thought that writing him the following message would be the best way to portray my intentions: 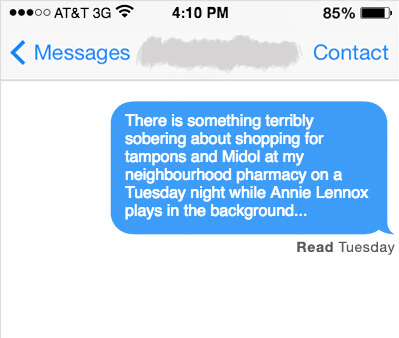 Suffice it to say, the guy did not have much to say in response to my tell-all tale, a cross between an dry-witted autobiography and a horror story...because of the blood, of course.

Turns out it made no difference anyway, because by that Saturday, we were hooking up in my bed. He knew I was on my period, and when things started...you know, moving down there, we had a quick check-in on the status of my menstrual flow:

"Are you still on your period?"

I still had a tampon in, so ran to the bathroom to see what the status was, and though it wasn't heavy, it also wasn't light just yet. I always envied those girls who would just bleed for 2-3 days then be done with it.

"Mmm...there's still a bit of blood," I announced to his buck naked body as I walked back into my room.

I'm 31 years old and have been with upwards of 80 sexual partners in my life, with this interaction I just recapped being one of the most recent encounters I've had. And would you believe it if I told you that this was probably one of the only times I ever had a guy deny me sex because I was on my period?

Well. I'm one of the lucky ones.

While it didn't offend me that he didn't want to stick his penis in my vagina because it was releasing blood in that moment, it did cross my mind that he was making a big deal out of nothing—I mean, it's not like we were doing it on the first day of my period, you know? The cycle was almost over! There would have barely been a mess. One word: towel.

I say I'm lucky because most (and I'm talking 99.9999%) of the guys I have been with have thankfully grown out of that elementary school mentality where "girls are gross," and "eww, blood." Guys who understand that menstruation is a natural thing, that blood does not bite, and in some cases, who even know the little secret that for some women (such as myself) having sex on your period feels good—really good, almost better good. Guys who have heard of this magical piece of thick cloth called a "towel" that has the power to absorb liquids. Can you imagine?

I want to be with a grown-up who understands that women bleed from their vaginas once a month which means that we are fertile and can have babies because it's all part of nature and it is beautiful, not gross, you're gross for not seeing how beautiful it is you big man baby.

Unfortunately, some of my fellow kinswomen have not had quite the same, near-spotless (pun intended) track record as I have had when it comes to guys and period sex.

Take, for example, a friend of mine who had been longing to hook up with one of her best friends for some time, only to be scarred when it finally happened because she had been on her period at the time. The guy knew full well that she was menstruating, chose to have sex with her regardless, and then when the business was done and he pulled his penis out of her, there was (gasp!) blood on the condom, and so you know what he did next? Like a big baby, he ran to the bathroom all "grossed out" and proceeded to wash his genital area clean...which would have been acceptable I suppose, if my friend hadn't heard him saying "Ew, ew, ew, ew..." to himself repeatedly, and with clear disgust. I guess he just plum forgot that there might be a bit of blood on his dick, let alone failed to mention that he had a problem with seeing actual blood when he decided to put it in her.

Another girlfriend of mine recently broke up with a guy who couldn't handle the whole blood thing either—why, I ask? I feel like once you're past the age of...oh, I don't know, say, 11 or 12—well, okay, we're talking about men here so I'll be kind and bump it up to about 15 or 16, but definitely past your mid-teens, you should be able to understand that women get their periods. For most women, this happens once a month. So unless the sight or smell of blood makes you faint, it's something you'll probably have to learn to deal with if you ever want to be in a real relationship that lasts more than 3 weeks...because by that fourth week, you'll be screwed. And by the way, nobody's asking you to drink the damn blood, so relax.

This friend had been dating the guy in question for a few months, and whenever she got her period, they wouldn't have sex. His manner of disgust wasn't as open as "eww"-ing loudly and repeatedly for the entire world to hear, but more subtle and reserved; he was the type of guy who couldn't look at your puke after a night of heavy drinking (which happened to my friend, by the way), who thought that girls pooed flowers, and who did not want to go anywhere near you if you were menstruating.

For some girls, this is a common and even necessary barrier between partners that they are happy to live with; for others such as my friend and myself, this type of mentality is a deal-breaker. Speaking personally, if I can't have sex with my boyfriend while I'm on my period—not only because it feels amazing, due to the sensitivity down there being heightened but also because I want to be with a grown-up who understands that women bleed from their vaginas once a month which means that we are fertile and can have babies because it's all part of nature and it is beautiful, not gross, you're gross for not seeing how beautiful it is you big man baby—then it's pretty much a guarantee that we won't be having sex, period. Ever. Period.

Look, the best thing you can do is be open about your cycle with your partner. There are some brave folks out there (deemed "Bloodhounds" by the media, and I know there's a technical name for the fetish but I can't think of it right now) who actively seek out women who are menstruating- but that's on the extreme side of things. I'm not trying to glorify the period or pat anyone on the back here. I guess I can best sum things up with a little snippet of a conversation I had with someone recently about period sex:

Yeah okay, I know. Sometimes it's gross. I hate getting my period. I don't know a single female who celebrates every time she gets it. But at the end of the day, it's just blood. If you close your eyes, you'd never know the difference anyway, so be a man about it next time you decide to have sex with a girl on her period. And if you don't? Well, then grow up and learn to do some laundry. Towels can be washed.