Telling Your Boyfriend You Used to Have a Girlfriend 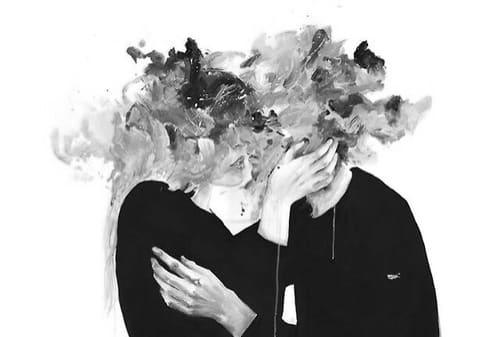 I don’t care what you say, I don’t care what you think, ALL women are sexually attracted to other women. They just are. If today’s world wasn’t so damn heteronormative and love was truly blind (this bisexual can dream!), then there would undoubtedly be so many more same-sex couples…especially female ones. Even women who really aren’t attracted to other women can understand this. Ladies, think of your female friendships vs. your relationship with your boyfriend. I mean really think about it. Which one is more...intimate? Which one is more emotionally fulfilling? Who truly understands you better? Now, imagine…if you and your best friend had sex. (Entirely ignoring the ickiness of fucking someone who is basically your sister).

I remember reading Lisa Diamond’s masterpiece “Sexual Fluidity: Understanding Women’s Love and Desire” in university and being like…holy shit. That’s me. In her book, Diamond explores female sexual fluidity by tracking the relationships of nearly 100 women over the span of a decade. These women have relationships with both men and women, never committing to one sexual identity or gender. They are driven by their innate desires, their love, their lust, and their infatuations - regardless of biology. I am one of these women. My friends love hearing my stories. They tell me they admire my confidence and bravery. Some of them go as far as to say that my life is a freaking telenovela. I don’t really see it that way. I understand how they do, though. I go after what I want, when I want, doing anything else would mean I’d be living a life that wasn’t true to who I am. Why would I seek something subpar?

I have a lot of female friends who admit to wanting to sleep with women, but do not want to tell anyone about it out of fear that they will be pegged as gay. Of course that's something I've thought about...but I care about fulfilling my own sexual and romantic desires much more than I care about what others think of me. Also, I doubt I could ever feel emotionally or even physically connected to someone who isn’t completely open-minded and accepting of others. So...if someone doesn’t want to date me because I’ve been in a few same-sex relationships, then I don't want to date them either.

A couple of months after ending a beautiful two-year relationship with an incredible woman, I started to date men again. I missed hetero sex and the male body. I missed how cute guys can be when they open up and show their soft and gentle side. I truly craved that. I started spending time with a really cool and handsome guy who, after a few weeks, was beginning to understand me and the kind of person that I am. We were able to talk about work and life and movies and podcasts and people we admired. We started to have sex and that was equally as good. After a few weeks, he knew so much about me, but still was unaware of my sexual past. It's such a large part of who I am. We had yet to talk about past relationships and I didn’t feel the need, nor did I have the desire to ‘come out’ to him. I am so proud of everything that I do (otherwise I wouldn’t do it). I'm proud of my presence in this world. I knew that if he wasn’t completely cool with my fluidity, I would undoubtedly have to end whatever it was we had. It's just that, honestly, I didn’t want to. I was really enjoying his company. And the sex that came with it.

One night he came over and we agreed to ask each other private questions to get to know each on a deeper level. First, he showed me childhood pictures and we talked about our parents. Then we spoke about our high school experiences and our siblings.  Shortly after, I asked him how long it had been since he was in a relationship and then he asked me the same. That’s when I dropped the bomb. Not expecting him to care too much, but definitely expecting him to at least have a few questions.

His reaction was better than anything I could have hoped for.

“You mean to tell me I beat out all men AND all the women?”

I told him yes, of course, and asked him if it bothered him. He said this: “I feel you orgasm when I’m inside you. I know you’re not faking it. I know you’re into this, you’re here, everything up to this point doesn’t even matter.” That moment was so completely clarifying. It validated everything that I felt for him way more than a first kiss or sleeping together ever could. Since then, our sex has been unbelievable and our emotional connection heightened. It really reiterated how important it is to be wholly and completely accepted by your partner. For me, that starts with telling him/her how you feel and airing out your deepest darkest secrets. Truth is, if they aren’t well-received...then they probably don’t deserve you.

Men play a large role in fostering female sexual fluidity and the empowerment that comes with it. An open and accepting partner is vital both sexual empowerment and ultimate fulfillment. To all the men out there...encourage your girlfriend to explore her sexual fluidity. Seriously. She will love you more for it - and you will have better sex because of it.